Nikia Chaney is the author of us mouth (University of Hell Press, 2018) and two chapbooks, Sis Fuss (2012, Orange Monkey Publishing) and ladies, please (2012, Dancing Girl Press). She has served as Inlandia Literary Laureate (2016-2018). Her poetry has been published in Sugarhouse Review, 491, Iowa Review, Vinyl, and Pearl, Welter, and Saranac.

Her memoir, ladybug, is upcoming from Inlandia in 2022. 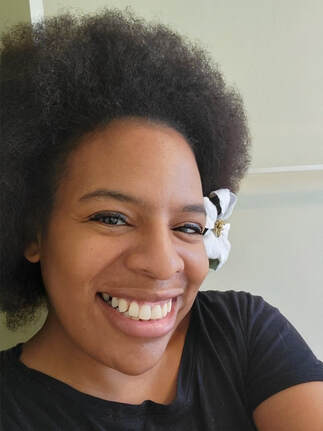 Nikia's poetry has been chosen by Nikki Giovanni as the winner of the 2012 OSA Enizagam Poetry Award.  Of her poem "the fish", Ms. Giovanni writes, "...What power this poem has with showing the difficulty of growing up with a terrible secret. What a powerful song this friend sings for a friend drowning in if not evil, then certainly, difficulty.”  Highly active in the community, Nikia has won fellowships and grants from Cave Canem, the Millay Colony for the Arts, Squaw Valley, and the Barbara Demings Fund.

Nikia is the founding editor of shufPoetry, an online poetry journal for experimental poetry.  She is also the founder of Jamii Publishing, an independent press for literature based in community projects.

Nikia is the author of a full length collection of poetry, us mouth (University of Hell Press, 2018).  She has three chapbooks Sis Fuss (Orange Monkey Publishing, 2012), ladies, please (Dancing Girl Press, 2013), and a collaborative visual/poetry hybrid, Mapless with Cindy Rinne (Cholla Needles, 2018).  She has been published in Iowa Review, Portland Review, Saranac Review, 491, Pearl, Sugar House Review, Welter, Blackberry Magazine, Kweli, Vinyl, tnY.press, She has been anthologized in the Breakbeats Poets Vol III: Halal If You Hear Me. Her visual poetry has been featured in After the Pause and the anthology, The Future of Black: Afrofuturism, Black Comics, and Superhero Poetry.
​
In 2016 Nikia Chaney was appointed as the fourth Inlandia Literary Laureate for the Inlandia Literary Arts Institute.  As Literary Laureate, Nikia has organized an exhibit celebrating women and music for Black History Month, moderated panels for the Tuskegee Airmen, developed a Homespun Chapbook book series for Inlandia Institute, and created a workshop/exhibition program, Voices Against Violence, which seeks to address the community of San Bernardino.

In 2019, she became active in the Santa Cruz community.  She is a member of the Hive Poetry Collective and the founding member of Amplify: Cabrillo Student Podcasts. She volunteers time with the SCC Black Coalition on Racial Justice and Equity. She teaches African American Literature and Creative Writing at Cabrillo College.