Nikia Chaney is the author of us mouth (University of Hell Press, 2018) and two chapbooks, Sis Fuss (2012, Orange Monkey Publishing) and ladies, please (2012, Dancing Girl Press). She has served as Inlandia Literary Laureate (2016-2018). She is founding editor of shufpoetry, an online journal for experimental poetry, and founding editor of Jamii Publishing, a publishing imprint dedicated to fostering community among poets and writers. She has won grants and fellowships from the Barbara Demings Fund for Women, and Cave Canem.  Her poetry has been published in Sugarhouse Review, 491, Iowa Review, Vinyl, and Pearl, Welter, and Saranac. 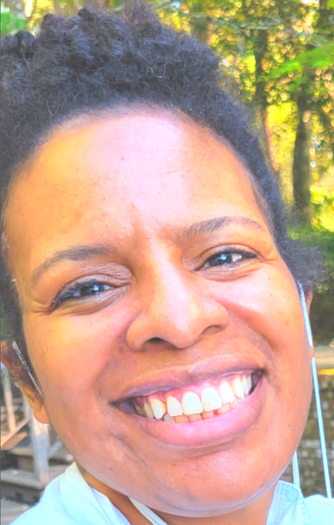 Nikia's poetry has been chosen by Nikki Giovanni as the winner of the 2012 OSA Enizagam Poetry Award.  Of her poem "the fish", Ms. Giovanni writes, "...What power this poem has with showing the difficulty of growing up with a terrible secret. What a powerful song this friend sings for a friend drowning in if not evil, then certainly, difficulty.”
Highly active in the community, Nikia has won fellowships and grants from Cave Canem, the Millay Colony for the Arts, Squaw Valley, and the Barbara Demings Fund.

Nikia is the founding editor of shufPoetry, an online poetry journal for experimental poetry.  She is also the founder of Jamii Publishing, an independent press for literature based in community projects.

Nikia Chaney has also been active in the Santa Cruz community. She is a member of the Hive Poetry Collective and the founding member of Amplify: Cabrillo Podcasts. She teaches African American Literature and Creative Writing at Cabrillo College.